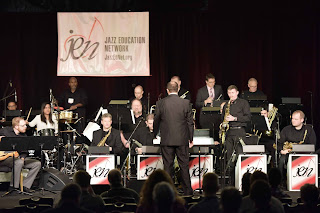 HAPPY NEW YEAR! 2016 was a very exciting and crazy year!  Back Home  came out and it was very well-received by jazz fans and critics. The album   received very good radio airplay throughout the US and internationally (DR, Peru, Colombia, Australia, UK).   The piece "Vantage Point" appeared on Jazziz magazine's (winter edition).  SGLJO at JEN 2016 (Photo: Chang Su) The album won a Gold Medal at the Global Music Awards and it was named on the top 6 at the "Best of 2016" - Category Latin/Brazilian Jazz by Ken Franckling. UNC Gala 2016 (photo: Woody Myers) I was lucky to share by doing several clinics and concerts with the Socrates Garcia Latin Jazz Orchestra (SGLJO) in the US and the Dominican Republic, including two concerts at the JEN Conference in Louisville, KY, the performance of one piece at the UNC Gala, guest conductor at the Santo Domingo Jazz Festival (Casa de Teatro) with the National Conservatory of Music's Big Band. I also h
Post a Comment
Read more
More posts